Vedic with his grade 1 Science Project, How Windmill Blades Spin. 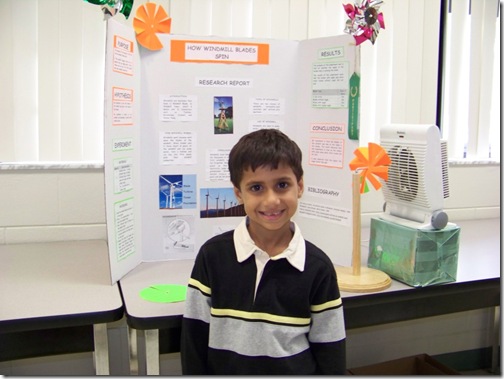 The purpose of this project is to find out how windmill blades spin.

I like windmill because they are so powerful they can pump water, turn a turbine and cut hay into little seeds with their windmill connection.

My hypothesis is that the blades of the windmill spin due to the angle in the blades.

My hypothesis is based on toy windmills and knowledge I gained while reading books.

1. Build the windmill stand and place it on the ground.

2. Place a fan approximately 1 foot away from windmill stand.

3. Place different type of blades on the windmill stand.

4. Turn the fan on to create the wind & observe whether the blade spins. Do they spin?

5. Repeat the above but change the angle of the blade to higher angle. Keep trying different blades & angle until one of the blade spins.

6. Note the observation into the result table in the note book

The purpose of this experiment was to find out whether the angles in the blades help in spinning the blade.

The results of the experiment were that the blades with angle spin while other blades without angle did not spin.

I also observer that the higher the angle faster the spin.

Windmills are machines that have 1) Windmill Blade, 2) Windmill Tower, Shaft & Gears and 3) Connectors such as Turbine, Grindstone, Crasher and Water Pump.

Windmills work because wind spins the blades of the windmill. When blades spin it turns shaft & gears of the windmill and can pump water, turn a turbine and cut hay into little seeds with their windmill connection.

Wind is air in motion. Wind form by sun by heating air unevenly.

Windmills are used to pump water, turn a turbine and cut hay into little seeds.

Wind farms are made of anywhere from 60 to 1000 windmills in a big area to generate electricity that can be used by a small city.

Windmills have been around for thousands of years. The first windmills were used for irrigation. Windmills are great as they provide electricity, pump water and grindstones. Windmills use natural resource which is wind and do not produce any harmful waste.

The Wind at Work, An Activity Guide to Windmills, Gretchen Woelfle, 1999

How Do Windmills Work, http://monsterguide.net/how-do-windmills-work